The Patios of Córdoba

The patios of Andalusia are rectangular courtyards which are fully enclosed by a colonnaded portico (porch), i.e. a roofed set of columns which allow people to walk around their open courtyards shielded from sun and rain. Their overall design closely resembles so-called peristyles of Spain’s Roman period, the main differences being that in Roman days the yard was often a partially unpaved garden area surrounded by open columns. The floor of contemporary Andalusian patio yards, on the other hand, is often covered with decorative pebbles, bricks or tiles and its columns are connected by arches.

You will often read – even in seemingly reputable publications like the New York Times – that Spanish patios are an accomplishment and legacy of Islamic rule in Spain, but those claims are hardly supported by historic fact. It is possible that the addition of arches can be attributed to Muslim architecture, and it is absolutely sure that the marvelous azulejo tiles of the Iberian peninsula (often found in patios) are a lasting reminder of the Islamic era, but the general concept of a peristyle–patio is much older.

And so is its motivation and everyday use. A courtyard in Roman days often contained plants, water features like fountains and ponds as well as benches and sculptures turning it not only into the showpiece of a well-appointed Roman villa, but also providing a cool and protected hideaway in searing Mediterranean summer heat.

By another theory, Andalusian patios experienced peak popularity during the industrial revolution of the 19th and 20th centuries when country folk flooded into the cities and tried to recreate a small piece of open country lifestyle in their patios. While this seems a bit far-fetched and in any way too recent, it would explain the Andalusian infatuation with patios and the fervor to create the most cozy and pretty patios and even to compete with others for the price of most spectacular one.

Comparing different accounts as to when the Córdoba patio festival first started, it emerges that it was held sporadically in 1921 and 1927 and that in 1933 it turned into a regular event organized by the city council. The event was not held during the Spanish Civil War 1936-39 and the first years of the Second World War 1939-45 (in which Spain did not participate, but times were hard anyway). As of 1944 the patio festival tradition was firmly established and since 2012 it is even on one of the UNESCO world heritage lists. The festival is usually held in the first two weeks of May.

Initially a good dozen private courtyards located in the old Alcázar Viejo district (North of the Alcázar gardens) participated in the patio festival. As the competition became more popular, other districts to the North-East of the Mezquita Cathedral joined. Today you can enjoy the sight of 50+ patios which are grouped by parishes/districts: San Lorenzo, Santa Marina – San Agustín, Regina – Realejo, Santiago – San Pedro and Judería – San Francisco. In addition there is a number of pretty patios around the Mezquita that do not take part in the official competition, but can be visited anyways. Most patios these days are small courts embedded in a single family home, but there are also a few older, larger multi-dwelling patios (called ‘casa de vecinos’ = neighbors’ house) particularly in the Alcázar Viejo area.

Look at last year’s flyer showing the locations and timings (Monday to Sunday 11:00 – 14:00 & 18:00 – 22:00) of the various patio routes, plus the other events which accompany the patio festival, like flamenco dance and musical presentations. Official flyer for the 2017 fiesta

While simply strolling through the patios and admiring the creativity and botanical skills of their owners is a lot of fun in its own right, joining the patio crowd is also a good opportunity to mix with and get a feel for what ‘ordinary’ Cordovans are all about. Reserved but friendly, I would say. It helps hugely, if you have basic command of Spanish as most Spaniards, including the younger generation, do not speak much English.  In any way, you are operating on their turf and cannot expect them to reach out to you in your language.

The patio competition is not just for prestige and pride, but means a few thousand Euros in prize money for the winners, money which is usually re-invested in upgrades of the champion patio. Members of the jury are easily identified by their important papers and serious looks. Although there is – to my knowledge – no popular vote for best patio, you can reward the owners of the ones you enjoyed most by a small, voluntary donation. A box is placed near the entrance for that purpose.

If you somehow cannot or do not want to accommodate the siesta-driven patio opening hours, you can tick off Córdoba patios by visiting the 12 excellent specimen on display in the Viana Palace. It is open Tuesday to Saturday 10:00 – 19:00 and Sundays 10:00 – 15:00 (but there are seasonal changes, so check their website before or simply google the place).

The palace was modified and extended numerous times since it was established during the 15th and 16th centuries and thus accumulated a variety of patios spanning five centuries of architectural fashion. At 5 Euros for a self-guided tour through the patios and 8 Euros for the works, including a number of very stylish and well presented salons, it is an affordable piece of good old tourism. 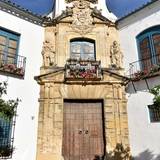 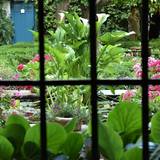 Peeking through a window into a patio at Palacio de Viana (c) nupursworld.com 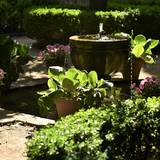 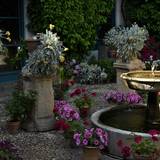 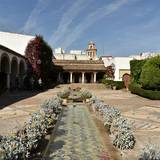 Patio of the Columns at Palacio de Viana (c) nupursworld.com

It goes without saying that Cordovan patio tradition can be a great practical inspiration for Indian visitors looking to add style to their own hot-country homes. Why not bring the flair of Andalusia into your suburban home by adding a small Córdoba-inspired patio?